Soba is a type of thin Japanese noodle made from a combination of buckwheat and other type of flours (e.g. wheat flour). The buckwheat gives the noodles a slightly nutty taste. In Japan, it is served either chilled with a dipping sauce, or in hot broth as a noodle soup.

Soba noodles only have about half the calories and carbohydrates as compared to typical white flour pasta.

Soba contains all eight essential amino acids, including lysine, which is lacking in wheat flour. It is also a good source of nutrients like manganese, lean protein, carbohydrates and thiamine. Since buckwheat does not contain gluten, buckwheat noodles are a good choice for people following a gluten-free diet.

Commonly Asked Question: Why is my soba dough so crumbly and doesn’t come together?

The crumbly texture is quite common when working with an all buckwheat dough since it is gluten-free. That is one of the reasons why many homemade soba noodle recipes uses a combination of  wheat flour to make the dough easier to work with. It needs a binder, and using wheat flour for example helps it stay together a bit better. In traditional wheat breads, the binder is gluten, which is formed as the dough is being worked – it is that formation which makes the mixture a dough, rather than a wet paste or grit.

A dough made from just buckwheat flour and water will crumble easily. The binder produced this way is very weak and the noodles becomes very fragile, dries out and prone to coming apart easily. Making authentic soba noodles is an art form requiring years of experience to perfect. 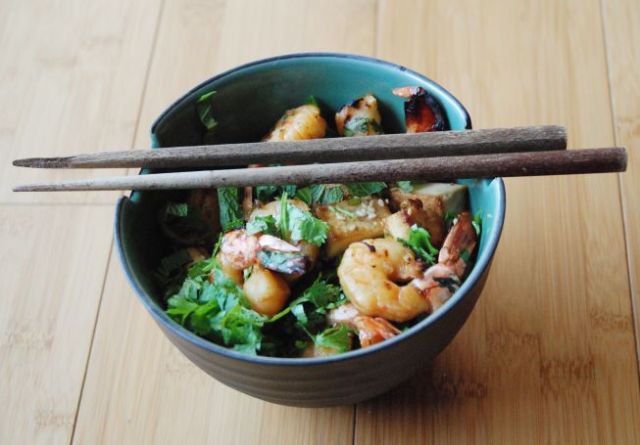 I had a hankering for buckwheat soba noodles, so along came this recipe. I wanted some tofu, but I also wanted prawns, so why not combine both. If you are vegetarian, feel free to omit the prawns of course.

This recipe looks like there’s lots of steps, but if you do some prep in the morning like I do since I have a toddler running around and she’s not one to entertain herself yet for hours by herself, jeez, she’s so selfish. For this reason, I tend to do a lot of prep in the morning, so that when we get back from our afternoon outing after her nap, I can quickly whip up dinner while she by Cinema-Plus Pro” href=”#81309644″> plays

or hangs off my leg.

Have you tried soba noodles before? Soba is the Japanese name for buckwheat. It’s a type of thin noodle made from buckwheat flour. Here’s a wonderful soba recipe filled with loads of healthy ingredients!

This dish’s inspiration comes from Japan. Soba noodles are an important staple of the Japanese cuisine. There is a dish in the Japanese cuisine with cold soba noodles, but for this post, I turned it more in a type of warm salad. I actually got the idea to make a salad with these soba noodles from Allison from the beautiful blog “Spontaneaous Tomato” (she takes amazing pictures!). She made an amazing and so yummy looking Vietnamese style soba noodle salad, which really inspired me, but I tried to stick to Japanese in this dish and I mixed in all kinds of different flavor elements of the Japanese cuisine 😉 I hope you will like this very “fusionized” recipe, it’s very fast and easy to cook up, therefore perfect for a week-day dinner.

I was also happy to finally cook something with buckwheat again. Ever since I started my…

Learn how to say it in Korean! 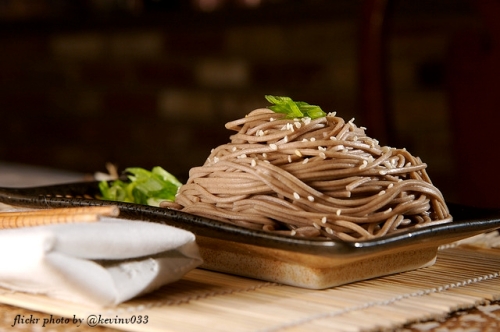 Soba is the Japanese name for buckwheat.  It is a type of thin noodle made from buckwheat flour and wheat flour. Soba noodles can be eaten chilled with a dipping sauce, or in soup.  It contains high amounts of fiber, minerals and vitamins B1 and B2.

In Japan, soba is mostly referring to noodles in general and this has been a staple of the Japanese diet.

Consuming soba noodles can be an alternative for dieting. It is low in calories and high in fiber, which makes it a great choice. Being high in fiber, it keeps you feeling full longer thus helping you to stop overeating and controlling your appetite. A great food to include in your weight loss program.

Combine soba noodles with other foods like vegetables, beans and meat (e.g. salmon) to give a healthy meal with plenty of nutrients for your body!

Soba noodles can be bought from supermarkets, or if not try your local organic stores.

How to Sprout Buckwheat [Video]